Military Air Chart of the 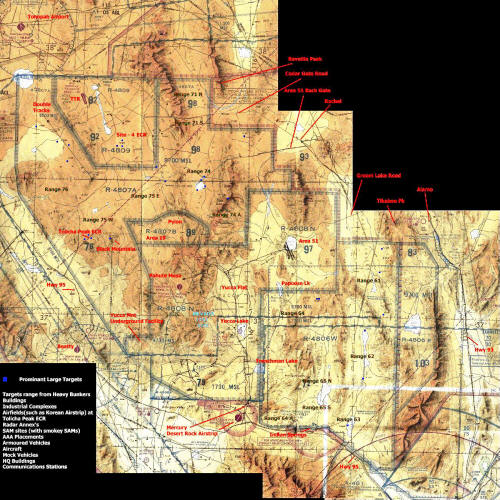 During Red Flag, the Blue Forces (Allies) generally tend to start from the North West Ranges that start with the numbers 70 and onwards. They also start in the Military Operating Areas around the vicinity and also around the Tonopah Test Range who has control of this sector.


The Red Forces (Enemy) start to 'run-in' around the Desert and Reveille Military Operating Areas (MOA) around Rachel and Caliente. It is here, to the north, east, south and west of Rachel that they usually end up meeting one another and engage in massive dogfights. The Tikaboo Valley is often used by B-52H and B-1B Bombers on low-level runs north and northwest usually at heights below 1000ft. The Actual Desert MOA has a height limit of just 100ft AGL so lots of aircraft get down to move the mud regularly.

Green Flag is centered more on the Site 4 and Tolicha Peak Ranges administered by Tonopah Test Range. The ranges around these areas have high threat facilities with Russian Equipment such as SA6, SA3 SAMs, ZSU-23-4 AAA Vehicles and various Early Warning Radar Systems. The SAMs on all the ranges are simulated by an actual rocket that is fired up towards the aircraft with a huge flare and lots of smoke.

These are called appropriately 'Smokey SAMs' and are as real as you can get without actually being fired at by a real SAM threat. On the ground during the exercises there are many military targets live and dumb. These are also in the MOAs on public BLM Land, especially around the Rachel and Cedar Gate Areas. These range from Mobile SAM units, Mobile AAA and also convoys of trucks moving or parked.

The best places to see the activities are described below.

Tikaboo Peak:  From here you are 7976ft high and can see right across the Tikaboo valley and well, all around you really! The aircraft going for the targets in Range 61 of which one set of targets are only a few miles inside the border and easy to see. From here also you can see the various aircraft from fighters to strategic bombers coming up the Tikaboo valley at low level and they will be below you so it is a must for the camera! ( See Tikaboo Peak Map )

Powerlines Overlook:  Named by Joerg Arnu this ridge is located near Mount Irish. You need a good 4x4 to get here according to Joerg who has visited the ridge many times. From this ridge you can have a good view similar to Tikaboo but from a lower altitude of the whole of Tikaboo Valley. Good shots with the camera can be taken here too of the aircraft above, beside and below you. (See Powerlines Overlook)

Coyote Peak:  Located just south east of Rachel this peak is 7910 ft. high and affords also good views of the area although some larger mountains stand in your way, such as Bald Mountain. Mount Irish is towering behind you also to the east. Sitting on top of this peak can give you spectacular views of dogfights and ACM during the Flag Exercises.

Reveille Peak:  A relatively new peak for spotting, now made famous by the Swiss Mountain Bat and his group. This mountain affords views of Area 51 45 miles to the south east with outstanding views right down the length of both runways!
Now that this mountain has been made famous by being able to view operations at the base, let alone seeing down its runways, it is possible the Air Force can claim this. What makes it more possible is that the mountain is right next to the border, just like Freedom Ridge and White Sides.

Hayford Peak:  Not a lot of people know this peak and so not a lot of people go here...Located on the chart above directly east of Range 63. You can't miss it. The peak is ideal for viewing aircraft and like i said, not very well known at all. It is also very hard to get to and you would probably need a 4x4 vehicle. Its the large mountain located in the Sheep Range.


When I was in this area I saw many aircraft going over the peak from fast jets to C-130s. It is also 9912ft high so this affords brilliant views of the following: