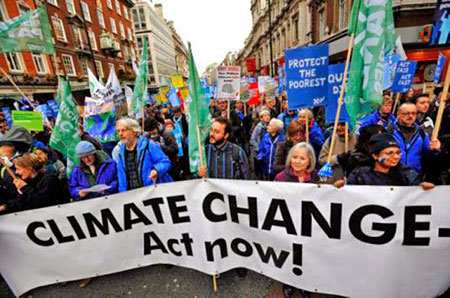 Big business and the big political parties and politicians they own have converged in what is being disingenuously called the "People's Climate March."

MSNBC would report in an article titled, "The largest climate march in history kicks off in New York," that:

They’re calling it the largest mobilization against climate change in the history of the planet. On Sunday morning, protesters from all over the United States and the world are converging on Manhattan to demand that global leaders take action to avert catastrophic climate change.

Earlier this week Bill McKibben, founder of the environmental group 350.org, projected that the march would consist of "hundreds of thousands" of participants.

Not surprisingly little in terms of actual solutions are mentioned by the organizers and instead the march is meant to set the stage for political and financial deals to be made at the 2015 Climate Change Conference in Paris, France.

Organizing the march are institutions funded by the very governments and corporate-financier special interests that have helped create devastating environmental and socioeconomic disasters across the planet over the past several decades in the first place.

Also involved are profiteers who have taken advantage of the general population's genuine concern for the environment to propose and benefit from scams consisting of everything from land-grabbing thousands of acres in Africa to peddling "carbon credits" and other financial gimmicks that make immense profits from doing literally nothing at all in terms of production and by creating a false sense of security, may even be compounding environmental catastrophes.

For those drawn to such "marches" and who are dismayed or disillusioned by the disingenuous nature of those trying to hijack their good intentions to peddle self-serving political and financial gimmicks,

what can they do to develop and actually make good on the vague promises being made during this year's "People's Climate March?"


The Climate Always Changes - We Must Always Be Prepared

The climate is always changing, and nearly everything human beings and nature do, both on Earth and beyond it, has an impact on it.

A changing climate, like earthquakes and volcanoes driven by the constantly changing geological state of our planet, or diseases that sweep animal and human populations amid a perpetual biological arms race, will be a challenge humanity will always have to face.

Of course, human activity has an impact on the climate.

The construction of our cities creates microclimates, emissions change the constitution of our atmosphere - regardless of how much or little - contributing to a much greater array of natural and anthropocentric variables that collectively drive and change the planet's climate, among other things. 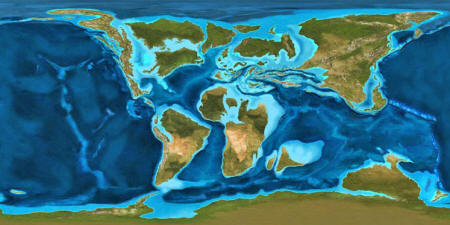 Late Cretaceous period saw CO2 levels many times higher than they are today,

with higher sea levels and Antarctica covered in temperate forests and teaming with dinosaurs.

The climate has shifted radically long before humanity rose,

and will continue to change regardless of what we do.

We can prepare for it, minimize our impact on it, but we cannot stop it.

Additionally, there is no way to predict with certainty, nor manipulate reliably the climate - at least not with the technology we currently possess - and surely not with the political solutions pushed forward by the very corporate-financier special interests staging stunts like the "People's Climate March."

While reducing humanity's impact on the planet should be one of many goals we collectively pursue, even if we managed to reduce our impact to zero, the climate would still change, and would still change for both the better and for the worse of the ecosystems that inhabit this planet.

Evolutionary, astronomical, and geological processes have all contributed to massive extinction events.

Humanity must understand that the only way to truly protect this planet is not to "stop climate change," which is impossible, but rather hedge and protect against it  through innovations that can weather climatic changes no matter what they may be or what may be driving them. 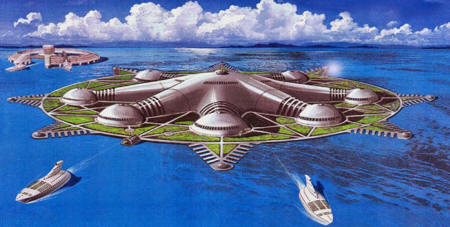 In many ways, agriculture itself is an expression of this. So is exploration and architecture.

Continuing along the road of these evolving disciplines will give us the tools we need to always be prepared no matter what the climate throws at us.


Reducing Humanity's Impact on the Environment

Reducing humanity's impact is a topic that in fact does get brought up by the ringleaders of the climate change movement.

And despite the austerity they have planned for the masses, none of their measures seem to address what will happen if the climate continues to change - as it has for millions upon millions of years before humans walked the Earth.

There is an alternative solution that is often never mentioned - one that doesn't hamstring human progress or demand resource rationing, or the curtailment of energy use or food consumption. It is not political in nature and does not involve one group of people dictating the lives and allowances of others.

It is never mentioned because it would be a direct, coordinated, global decentralization of the big-business monopolies and their socioeconomic and environmentally disastrous supply-chains, factory farms, sweat-shops, and the iron grip they possess over so-called "intellectual property" and research and development in all fields from energy production to biotechnology to medicine and mass transportation.

Local development of, by, and for the people, leveraging technology, open source collaboration, and focusing on pragmatic, technical solutions to our problems, including reducing our impact on the environment and hedging against natural disasters whatever their cause, is indeed the solution.

Consider the journey made by a plastic trinket, found on the shelf of Walmart.

It began in a sweatshop literally on the other side of the planet, hammered, pressed, painted, packed, and shipped off by people working under slave-like conditions using unhealthy chemicals and processes that would be unacceptable in the West. 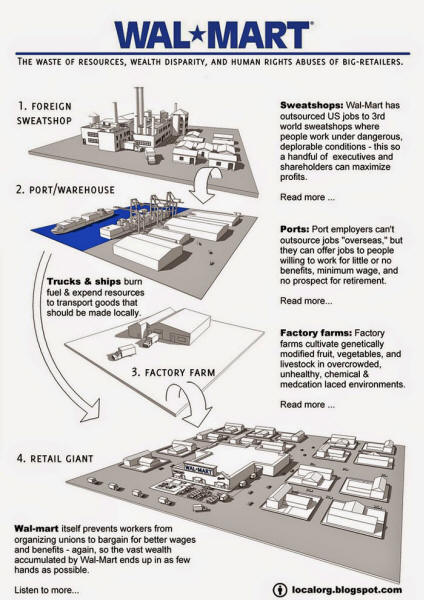 The trinkets are driven by trucks to docks where they are placed upon ships that traverse the Earth's oceans burning tons of diesel fuel, releasing scorching clouds of fumes behind them as they churn up the sea and all life within it.

The trinkets arrive on Western shores where they are moved by trucks, vans, or planes from the docks, to distribution centers, to the mega-retail outlet it is finally destined for.

To pick up your trinket, you must drive your car to Walmart, walk beneath hundreds of lights burning sometimes 24 hours a day, 7 days a week over its warehouse-sized consumerist troughs, purchase the trinket, and drive back home. 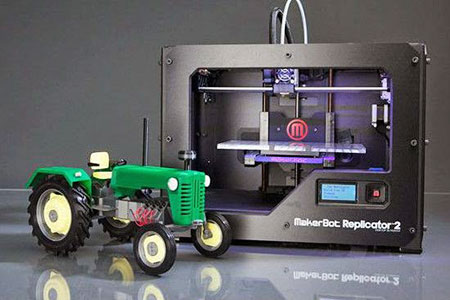 Consider an alternative - a 3D printer on your desk.

Open source designs can be downloaded and shared over the Internet with anyone in the world. Projects can be coordinated between designers and hobbyists anywhere on the planet. When you have obtained or designed the trinket of your choice, you print it out directly on your desktop.

There is no car drive, no ships, no trucks, no burning lights over shelf after shelf in a mega-retail outlet. You print exactly what you want, exactly how many you want, without the waste associated with consumerist-driven assembly lines and mass production.

Even the plastic fed into 3D printers can be derived from plant oils grown locally. Plastic and other materials can also be recycled locally. Gone are the sweat shops, truck convoys, merchant fleets, and all the unwarranted power and influence their existence grants the handful of special interests they serve.

The innovations in manufacturing technology that are placing the means of production literally into the hands of the masses will be followed by similar breakthroughs and paradigm shifts in biotechnology, agriculture, and medical technology.

Communities are already developing what could be called local collaborative institutions where technology is leveraged to solve the problems and desires of their residents. And while they are "local," they are by no means isolated.

They are connected globally to similar local institutions cropping up across the planet by information technology. Innovations will progress in parallel rather than in secret within the profiteering grip of traditional corporations, governments, and global institutions.

It will be these local institutions that pragmatically put an end to the waste, fraud, and abuse of immense corporate-financier interests and the negative socioeconomic and environmental impact they are demonstrably causing.

Personal manufacturing like 3D printing would do (and is already doing) more alone to undo harmful consumerist practices, faster, and in parallel than any top-down political solution cooked up at the Climate Change Conference in Paris could dream of doing.


What You Should Be Doing Instead of "Marching"

Instead of standing shoulder-to-shoulder with the very special interests that have created the current global system devouring our planet, activists genuinely concerned with human progress and the health and longevity of our planet's environment should be shoulder-to-shoulder with local innovators seeking to solve local problems and in parallel with other innovators globally.

Local hackerspaces or makerspaces , fabrication laboratories (FabLabs), DIYbio community labs, and other collaborative projects are providing the tools and resources needed to solve problems without the "help" of the very troublemakers that created them in the first place - big business and big government. 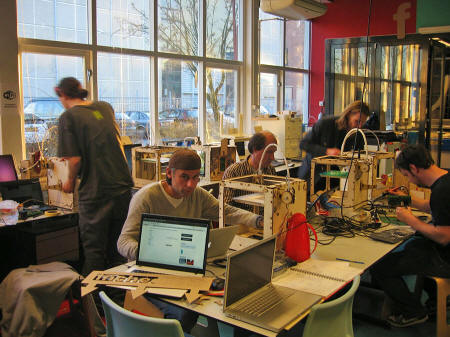 Building solutions themselves, rather than begging corporations
and governments to do it for them - local institutions like hacker-spaces and
maker-spaces set new precedents in how we organize ourselves

to work and solve problems.

After all, it is local people who understand best the challenges they face socioeconomically and environmentally.

They understand the quality of their food, water, and air and what needs to be done to clean it up - not those attending the Climate Change Conference in Paris. And it is local people who will be motivated above all others to truly solve these problems as efficiently and as quickly as possible.

And if we decide not to act locally, and instead defer to politicians to "save us," we can expect the same tricks and unfulfilled promises politicians make in every other regard.

People who are willing to march in the streets, but not dirty their hands to come up with actual solutions to these problems are not genuine in their cause.

Others who are willing to get their hands dirty should be spending their time exclusively doing so, rather than encouraging hot air from politicians and their self-enriching gimmicks that will cost us, not aid us in moving humanity forward with our best interests and the planet's health in mind.